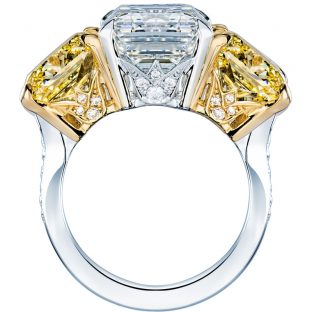 The rarest flowers from all around the world were planted in the Gardens of the Topkapi Palace. Tulip was the favorite one with its fascinating colors and charming scents. Inspired by this, stylizing gardens and flowers became one of Gilan s greatest talents. A much loved motif since ancient times, the tulip took on even greater importance under the Ottomans and also gave its name to an era. Especially in the 17th and 18th Centuries, there was a remarkable passion for the tulip that historians have named this period as the Tulip Era .Tulip became the symbol of love and the loved one during the Tulip Era with its presence in royal gardens and being identified with the sultanate, power and wealth. The Istanbul Tulip , with its spiky, thin, long and elegant shape often showed itself in various places of the Topkapi Palace Museum. The elegant tulip form constantly shows up in Gilan s designs. In 2004 Gilan developed a method to transform a gem into a multi-faceted open tulip shape. With this patented innovation mostly used with semi-precious stones, the House pays homage to an emblem of Istanbul.